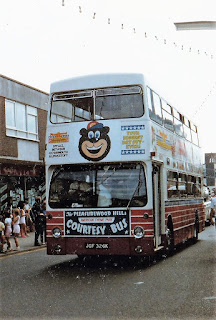 Park Royal bodied Daimler Fleetline JGF326K was new to London Transport in February 1972 as their DMS326. It began its career at Aldenham garage with spells at Peckham, Clapham and Battersea before being sold to Ensign in August 1982.

JGF326K was converted to single doorway and subsequently acquired by Pleasurewood Hills in March 1986. The amusement and theme park operated it on regular courtesy bus services to and from local holiday parks. After an engine failure in early 1994, it was sold to dealers Wigley of Carlton for scrap in March of the following year.

Roy
Posted by eastnorfolkbus at 11:06