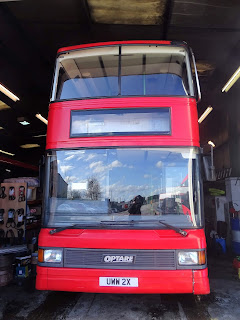 'Reg Vardy ' contacted us yesterday to say that Kings Lynn based Coastal Red had donated former Ipswich Buses 53 to the Ipswich Transport Museum.

Operating as Lynx Bus, the company has given the Optare Spectra bodied DAF DB250 UWW2X to the museum

It was new to Ipswich buses as X153LBJ in September 2000 who operated it on the Bury Road Park & Ride service in the town. It was acquired by Lynx exactly sixteen years later and subsequently gained the UWW2X plate. It was collected from Lynn on Saturday

The photo, supplied by 'Reg Vardy', shows it being inspected in Kings Lynn last month. Thanks 'Reg'

Roy
Posted by eastnorfolkbus at 11:39