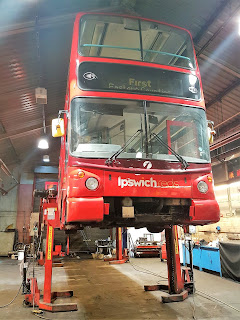 Also in the workshops recently was Volvo B9 37572 AU58ECW which was fitted with a new rear axle.

After being noted out of use in the yard at First Lowestoft's Gasworks Road depot last week, Dart 42956 WX06OMO is now in the rear yard at Caister Road. It is believed to have developed an electrical fault

Whilst on the subject of Lowestoft depot, Simon Bartram reports withdrawn ALX400s 30900 W774DWX and 30913 W768DWX were parked together in the yard towards the end of last week. Their fleet names and numbers were 'blued out' and no doubt awaiting collection. Meanwhile Lowestoft heritage liveried 30888 W743DWX, was sat at the opposite end.

My thanks to Simon and First for their reports