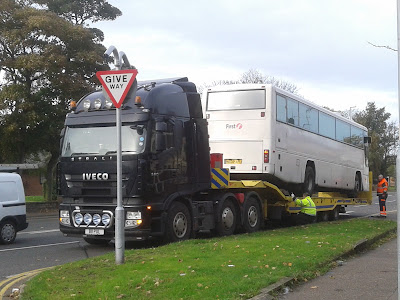 With the sixth Enviro (45112) leaving Caister Road, Lowestoft have sent SLF 42448 R448CCV  in return. Incidentally the Enviro was seen by Grahame Bessey working on the 101 service in Lowestoft early this morning

Finally, MPD 43359 V359DVG has had its new engine installed at Caister Road and, still with a few other bits and pieces to do, it should move back to Suffolk soon

My thanks to Ryan, Grahame Bessey and Thomas Baker for the reports and to the latter for the photo as well
Posted by eastnorfolkbus at 17:17