Some of you will be aware that I have been away for a short break in the Gloucestershire area for a few days and whilst I was there I took a few pictures of workings in the area; these will appear on the blog later

However, whilst I have been away activity continues on the local bus scene with reports being received from regular
contributors Grahame Bessey and Tim Miller

Both are ex First Midlands (Worcester) and 20515 arrived yesterday with 20514 expected during the
weekend.

Grahame also informs me that Norwich were short of single deckers on Friday (29th September) so Lowestoft sent Dart 43459 R459BNG to the city with Trident 33165 LR02LYC moving in the opposite direction. 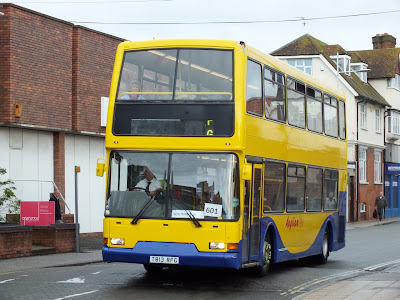 Regarding AnglianBus activity, Tim Miller has identified that the second Scania in the Car & Commercials yard with accident damage as YN05HFH

My thanks to Grahame and Tim for their continued support
Posted by eastnorfolkbus at 22:27