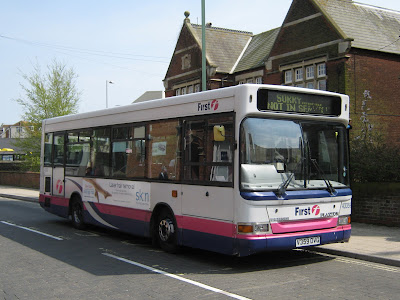 Following my report on Saturday, regarding a bleak future for Dart MPD 43359 V359DVG, comes the good news that she is to return to service sometime later this week

Ryan tells me that she has been undergoing repair at Great Yarmouth's Caister Road depot for almost two weeks now and is having a brand new engine fitted.

I took a photo of her at Gordon Road, Lowestoft shortly after being transferred from First Essex Braintree depot to work Beccles services.

With the introduction of the Enviro 200s at Lowestoft, Syd Eade reports the first Dart casualty; SLF 42429 P429ORL was listed as withdrawn on Saturday

My thanks to Ryan and Syd for their continuing support
Posted by eastnorfolkbus at 10:13