Today was my first visit to Norwich since the beginning of the new Park & Ride services began, i managed to photograph the majority of the new ones in use but wont share on here as i think its fair to say the new operations have been covered well enough around the various blogs and social media outlets. Instead i will share a selection of today's sightings which included the majority of the latest repaints for First.
Unfortunatly the controversial 66976, Is it Orange is it Yellow? livery was not out today so i missed the opportunity to give my opinion in the flesh. Sister 66978 was out in her new Purple look today.
I must admit that Norwich seems to be rather crowded with Buses now in the event of the new Park & Ride operations, Castle Meadow became very crowded at times with the amount of services running through, cant grumble from a photography point of view as plenty to see and picture!
Once i had captured all i required i ventured back to Yarmouth to see if i could spot the newly  repainted 30888 which has now reappeared in its new Lowestoft Corporation livery for inspection prior to returning to service, i was not disappointed and my connections at Caister Road paid off as i managed to have the full tour and have her taken outside in the sunshine for an inpromptu photo shoot! 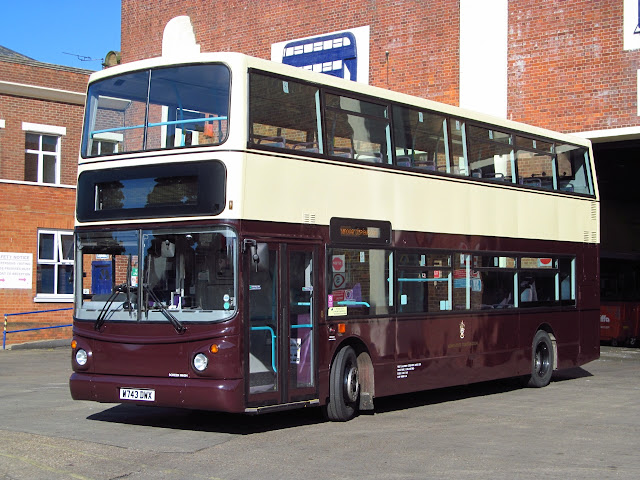 Finally a quick update of what is happening at Yarmouth, visitors include Coach 20515 from Ipswich for MOT along with 60621 from Norwich and 37569 from Lowestoft. 34111 is now the sole remaining Olympian in active service here and was on Bernard Matthews duties this afternoon along with 32629.

Thanks to all at Caister Road today.    Grahame.