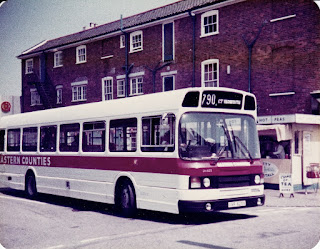 The bus is Leyland National Series 2 registered UVF625X which was new to the company in October 1981. Receiving fleet number LN625 the 49 seater was delivered in red livery. However, shortly after Eastern Counties introduced its 790 Eastline service between Great Yarmouth and Cambridge, it was singled out for its special livery

UVF625X is seen here nearing its Wellington Road destination and is about to negotiate its left turn from St George's Road into St Peter's Road one weekday lunchtime in August 1982.