Our Bus ~ Histories of Recent Arrivals 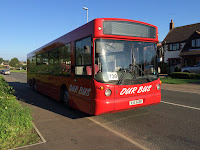 This morning I received the PSV Circle Newsletter for October providing histories of the four newcomers:-

VAG608R, Alexander bodied Volvo B10BLE, was new to Busways in April 1998 as R249KRG. Stagecoach North East later sold it to dealers Ensign in November/ December 2012 who moved it on to Velvet of Eastleigh.. Our Bus acquired it from Stagecarriage of Grangetown in August this year

Volvo B10M L141AHS was one of many vehicles to hold the cherished Parks of Hamilton LSK473 registration. It was taken into stock by the Scottish operator during August 1993. During its life it has also been registered KSK948 and 466YMG. Its previous owner was School Bus Company of Kingston Bagpuize in Oxfordshire

The fourth is Indcar bodied Iveco R208VJF, which was new in July 1998 having been acquired from Hayletts Midicoach of Thrapston near Kettering

Roy
Posted by eastnorfolkbus at 11:20