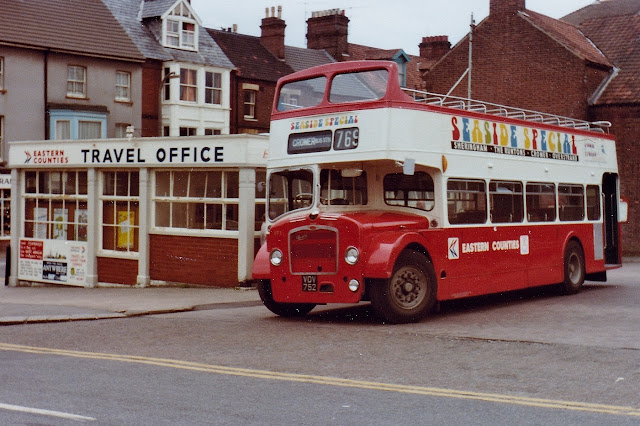 The decker is an Eastern Coach Works bodied Bristol LDL6G delivered new to Western National in November 1957 - complete with roof! It was converted in May 1972 and received the name Admiral Boscawen. Whilst with Western National it spent two months on loan to East Yorkshire during the summer of 1978

Both VDV752 and sister open topper VDV753 then moved to Eastern Counties Omnibus Company in May 1979 where they became OT1 and OT2 respectively in the fleet. Eight years later VDV752 was acquired by Mr Roberts of Croydon for preservation and from September 1987 to around June 1988 it was loaned to Squirrell of Hitcham; during which time it was in the care of the Eastern Transport Collection. However, by May 1998 Mr Roberts had moved the bus to Kentish Town

Both Bristols were acquired by Rexquote in 1999 and passed to Quantock Motors in 2004 when Stephen Morris sold Rexquote. VDV753 was later sold to Bristol Vintage Bus Group following the cessation of Quantock Motors' bus services whilst VDV752 is thought to be still in the care of the company