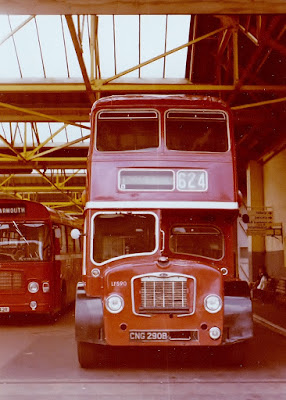 The decker, built to a H33/27RD configuration, was new in October 1964 and spent a fair part of its life allocated to Norwich Surrey Street. On this occasion it appears to be have just completed working the 624 which ran from Newport via Scratby, California, Ormesby and Caister, The lack of a destination blind would seem to indicate it wasn't a locally based vehicle

Thought to have been taken during 1980, the photo also shows part of another Bristol/ECW vehicle, TCL142R. The LH6L was new three years earlier. LFS90 incidentally met its end following a visit to the scrapman, PVS of Barnsley, in September 1980. So it was probably eking out the last days of its usefulness!

Roy
Posted by eastnorfolkbus at 10:45