The 22nd September 1983 was one such occasion when I had the camera with me, but I wanted a different vantage point. How about the top of the Market Gates multi-storey car park? 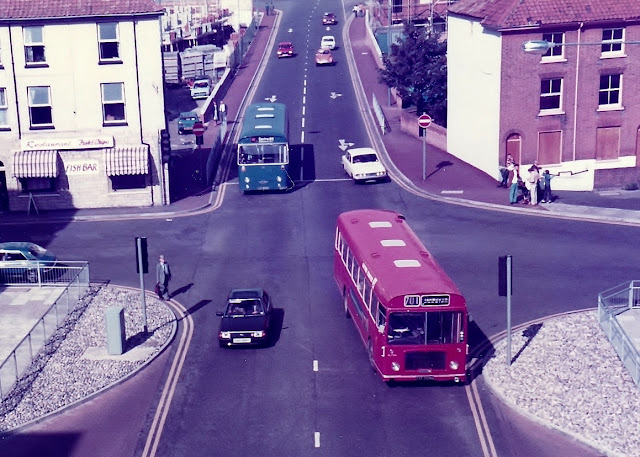 After climbing the many steps to the top, I got a reasonable view of the comings and goings. The simultaneous approach of an Eastern Counties single decker and a Great Yarmouth Transport liveried bus was a photo opportunity not to miss.

The Bristol was delivered to Eastern Counties in May 1969 as RL704. It is returning from Norwich on the 701 service.  During its time with 'Counties' it also spent some time in Cambridgeshire. It was finally withdrawn in 1985 and disposed of to Ben Jordan of Coltishall

The Swift was numbered 58 in the Great Yarmouth fleet when new in June 1970. It later passed to Centre 81, and is shown here working its local community transport service.  No further information appears to be available on the vehicle

Following the subsequent retail expansion at Market Gates this photo cannot be repeated. I haven't ventured to the top since but I am almost certain that you can't get a similar view

Roy
Posted by eastnorfolkbus at 18:02