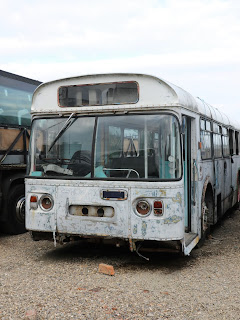 In March 1968 Great Yarmouth Corporation Transport received a batch of three unusual Leyland PDR1 Atlanteans with B39F bodywork by Marshall of Cambridge. They were unusual in that their double deck chassis was purposely built as a single decker

The batch were numbered 40, 41 and 42, with matching registrations GEX740F, GEX741F and GEX742F. They were withdrawn at some point during 1980 following newer replacements.

There is some good news regarding the future of GEX741F. John Wakefield tells me that it is being restored at Cobus, the vehicle restoration facility at Filey in North Yorkshire. It was previously in use as a youth bus and latterly a storage facility with Youth Action 2000 at Eden Park, London. It was rescued in 2003 by Clive Cook of Swanscombe, Kent and then passed to Paul Kevil, the current owner in 2016.

My thanks to John Wakefield for the update and to Nick Larkin for the use of his photo.

Roy
Posted by eastnorfolkbus at 09:09