During mid April I visited a a company on Harfrey's Industrial Estate in Great Yarmouth so I looked in at Ambassador Travel's premises at Gapton Hall Industrial Estate on my return journey.  It wasn't until today that I looked through the photos I had taken!

Looking through the rear fence on Edison Way I had observed a blue and cream bus present among the white Ambassador vehicles. Having noted a similar vehicle on a previous visit in March 2016, I had my suspicions as to its identity. 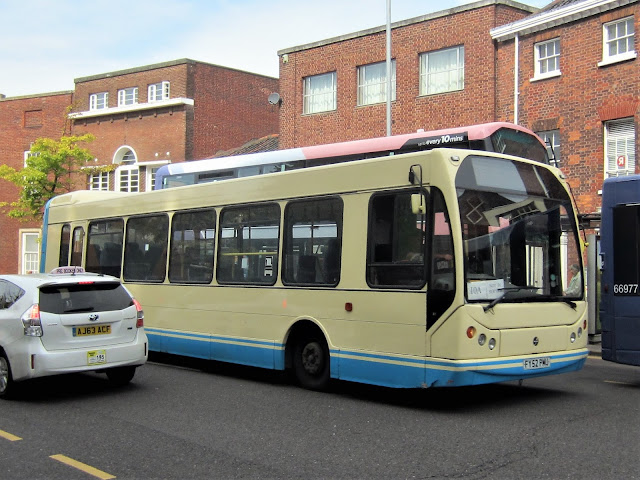 After a few photos it was confirmed to be former Lodge Coaches FY52PMU, an East Lancs Myllennium bodied MAN14.220. The bus was last operated by H Semmence & Company which is part of the Vistafield Group which also owns Ambassador Travel. It could often be seen in Norwich operating services there and the photo above shows it passing through Castle Meadow in August 2017

It currently appears to be in a withdrawn state and it seems that its last operating days are over. It also appears that the operator has removed some of the older withdrawn stock from the site.

Robert Collins tells me 'it is currently being worked on and being prepared for mot. Then returned to service but what work it will be doing is unknown. So look out for her on the road soon' Thanks Robert.

Roy
Posted by eastnorfolkbus at 12:29