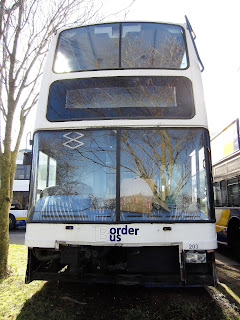 I received an email from Laine Tisdall this morning saying that on his 'daily commute to Norwich using the X2/X22, I've noticed that there is a BorderBus Plaxton President in the grounds of Beccles Primary Academy in Worlingham. It's presumably been there for some time, probably as an extra classroom or playground feature. It's easily viewable from the top deck of an X2/X22, but too far away to identify which one it is'

After some internet research, I found a tweet dated 22nd of September by the academy (@BecclesPrimary) which revealed it to be Plaxton President bodied Volvo B7TL X647LLX. It was identified by the fact that it still has its fleet number 203. The tweet also includes four photos of the bus on the way to or at its present location.

The accompanying photo was taken on a visit to BorderBus in February this year with 203 seen in a withdrawn state at the operator's Moor Business Park site in Beccles.

My thanks to Laine for bringing this to my attention.

Roy
Posted by eastnorfolkbus at 11:35