Former First Eastern Counties Volvo B7L 66334 MV02VBZ has been saved by Northampton Transport Heritage after being purchased from Ensignbus. The group posted a photograph and information earlier on their Facebook page.

‘All of our vehicles we have, until now, inherited or kindly have the use of. We have though had the opportunity and have purchased our first vehicle at a very good price for preservation.

MV02 VBZ is a Volvo B7L with Wright Eclipse body work. Originally numbered 358 it was new to First Manchester in June 2002 to help with the Commonwealth games. A year later in 2003 it was brought to First Northampton where it operated out of St James garage until 2012 and gained a new fleet number 66334 From St James it was transferred to First Norwich, and finished it's commercial days at the Caister road depot of First Great Yarmouth.
It was withdrawn and sold to Ensign Bus in March this year from where we have purchased it. Why, we hear you say? Well mainly for three reasons really; it's part of our transport history having served in Northampton for nine years, it will appeal to a mainly younger demographic of people who we need to attract to the movement and all importantly it complies with public service vehicle accessibility requirements.

Being PSVAR compliant means on many of our event days that we can run alternate trips on this as well as our traditional vehicles, meaning people with disabilities need not miss out on the action.

Currently we are looking for some undercover storage as there is currently no room at our current facility. At the moment 66334 is stored outside at a temporary location pending a more permanent premises. If you know of anywhere undercover please let us know. All being well, if Heritage Days goes ahead, it will make its return to Northampton in September.

Thanks go to Ross, Karl and the team at Ensign for their assistance’. 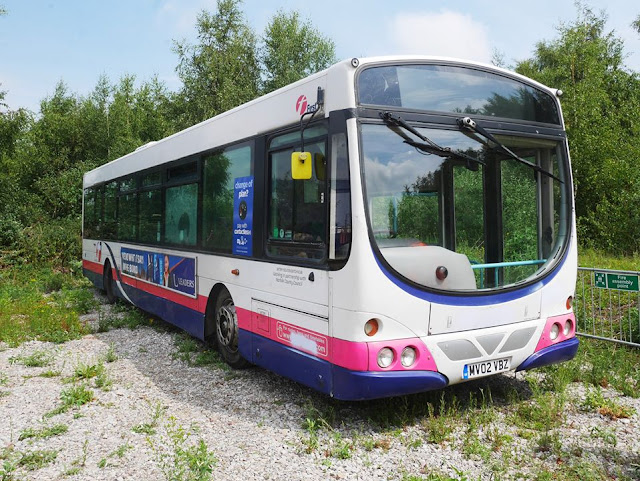 Many Thanks to Northampton Transport Heritage for allowing us to share their news!

Grahame.
Posted by Norfolkbus at 16:14