Grahame Bessey reports on two new arrivals at Reynolds of Caister; both of them are former Kent Top Travel vehicles.

Both are currently in their former owner's colours of allover yellow 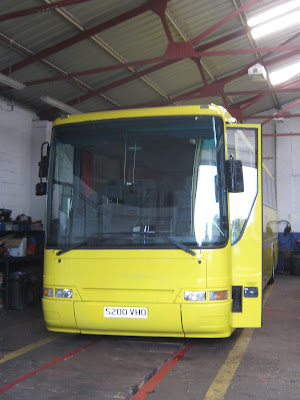 I visited Reynolds' premises earlier this afternoon and found 16 of the fleet on site with two vehicles out on business.

This number does not include the two newcomers; S200VHO was found hiding in the garage (bottom) and one of the employees told me that ICZ6697 was away for a repaint

This was the last opportunity to view them all on the premises at any one time as the school contracts are due to commence tomorrow.

My thanks to Grahame Bessey for the report
Posted by eastnorfolkbus at 18:30