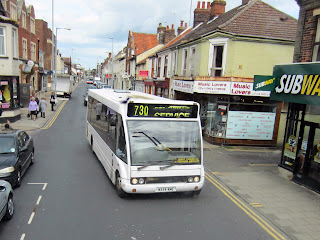 Little to report here of this Great Yarmouth based operator other than they operated their last 730 service in August. The 730 is a circular route between Great Yarmouth and Gorleston  via Cantley and Acle provided under contract to Norfolk County Council 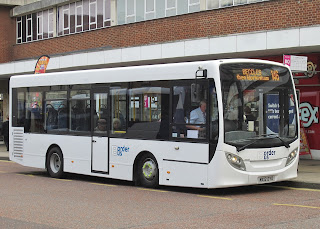 In February it registered the 146 route as two distinct parts - Southtown to Beccles and Beccles to Norwich with recent loadings being exceptionally high. Border took ADL Enviro200 MX12DYO on loan to help with the service

In addition to re-routing some of the schools services from the beginning of the new term in September, Border Bus also introduced two new routes - the SL8 and SL9 serving the Sir John Leman school from Oulton 9 (via Blundeston) and Barnby (via North Cove) respectively. These additional routes meant another decker arrival in the form of Plaxton President bodied Volvo B7TL LK51XGH

The blog reported in early August that this Catfield based operator had taken delivery of a brand new coach in the previous month. It was a Youtong bodied DAF registered YC15WDJ 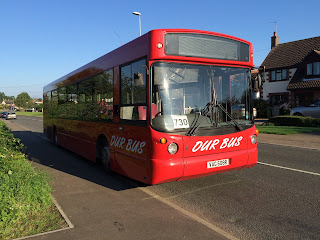 Another operator taking on more work is Acle-based Our Bus. It took over the running of the County Council supported 730 service at the beginning of September which was extended to the Gapton Hall Retail Park on Wednesdays and Saturdays only The inaugural service being operated by recently aquired Volvo B10BLE VAG608R

Reynolds Coaches continued to operate its coaches on schools and  contract work during the year with a noteable vehicle arriving in the shape of Mercedes Tourismo SN57LKC.

On the negative side, Van Hool Alizee bodied Volvo B10M 7289DD was made available for sale

The company also made significant changes to its bus network at the end of March including the service 6 between North Walsham and Great Yarmouth.

This Great Yarmouth operator has seen its full sized coach fleet dwindle away to virtually nothing. Its downward spiral continued in the early part of the year when we reported that the company had lost almost all of their school's contracts

This decline continued during July with the loss of its last schools contract between Sprowston and Broadland High School in Hoveton. This was followed by the loss of its contracts to run the 291 and 292 routes and the end of their TR3 and TR4 routes

The contract losses meant the disposal of vehicles was inevitable and during August Swift placed two coaches, a minibus and a taxi up for auction. The coaches were Volvo B12M CE2YRX (Swift retains its former S11WFT registration) and BMC Falcon BX55OFN; the minibus being Iveco YX51JPY. Autosan Eagle BV57MTJ had already been acquired by a Swindon operator

With the sale of Mercedes Benz MW51WFT to Irish operator Collins earlier this month, only Dennis Javelin SJI8127 remains as an example of what was once a large local fleet. Whilst Swift ceases to operate full sized coaches the Swift name continues in use on their minibuses and taxis

Following the acquisition of Whippet by Tower Transit earlier in the year, the former announced that they would not run their coastal services to Great Yarmouth and other coastal routes during the summer of 2015

Again 2015 has been a busy year indeed which is reflected in the 386 posts (so far!) - the second highest  annual total. This activity is no doubt due to the many reports received during this past year and I would like to thank all of you who have contributed

Special mention must be made for the tireless contributions to the blog from my partner in crime Grahame Bessey, who has really helped me out when times have been difficult. Thanks very much Grahame!

Finally, eastnorfolkbus would like to wish all of its readers, supporters and contributors a very merry Christmas and a happy new year. It looks as though 2016 could be an interesting year too