Earlier today the Traffic Commissioner for the East of England issued his latest fortnightly Notices and Proceedings Report and, as usual, a brief summary follows of alterations affecting our local area

Registration of New Services
Our Hire Limited, trading as Our Bus, is to introduce a new 737 service between Marsh Road, Halvergate and St Stephens Street in Norwich on Fridays only from 6th May 2016 - running on the first Friday of the month

Registration of New Services Granted Under Short Notice
Following the cessation of Anglianbus operating the 68 route between Rackheath and Great
Yarmouth Colleges later this month, Ambassador Travel has registered the Monday to Friday 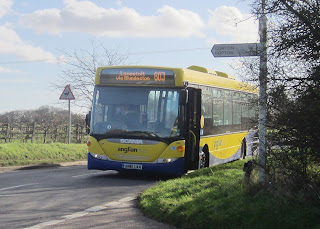 Anglian's interlinked Monday to Friday 60J service between Lowestoft Bus Station and Gorleston's James Paget Hospital has now been registered by Suffolk Norse as its 108 service. The four daily journeys will begin on the 28th March 2016 and there is speculation that it may be operated by minibuses due to the current low loadings of the 60J


Applications to Vary Existing Services
Whilst not directly affecting our immediate area, First Eastern Counties has registered timetable amendments to the western sections of the X1 between Norwich and Kings Lynn from 17th April 2016

Cancellations of Existing Services
AmbassadorTravel is to cancel its 577 service between Chedgrave and Great Yarmouth Market Gates. The single Wednesday only round trip will cease from 31st August 2016

Today's Notices and Proceedings Report also contains changes by operators which do not have any effect on our local services; so the full publication can be viewed by clicking HERE