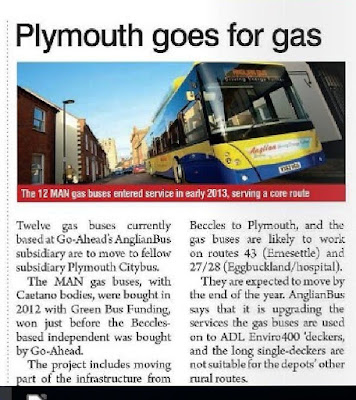 After many months of speculation, today's Route ONE magazine carried a report that Go Ahead subsidiary Plymouth Citybus were to receive gas buses from another subsidiary Beccles based Anglianbus.

It is the first time that Anglianbus has officially acknowledged the news. The infrastructure will be moving from the Suffolk town to Plymouth with the vehicles following to the south west later this year

Graham Richardson, who publishes the 'Plymothian Transit Bus Blog', has confirmed the move after speaking to the Managing Director there.

Roy
Posted by eastnorfolkbus at 17:51