Many of you will know that Ross Newman, of bus dealers Ensign, provides regular monthly updates of vehicle movements to and from the Purfleet premises. Last month's report (May) contains details of some bus departures of local interest. 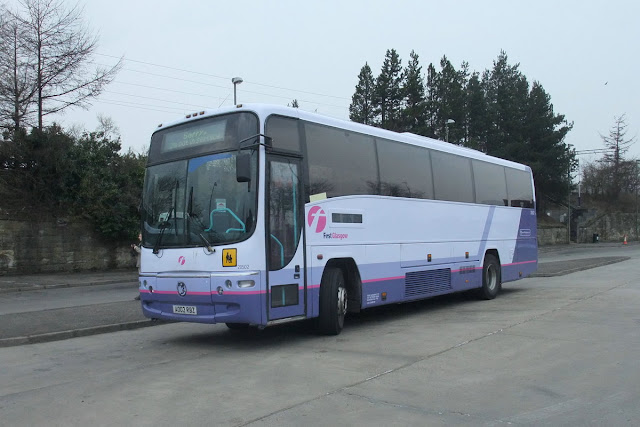 Firstly, former First Eastern Counties AO02RBZ, a Plaxton Paragon bodied Volvo B12M, has been acquired by Meritrule of Kingswood in Surrey. It joined the Eastern Counties fleet in May 2002 and,whilst its home depot was Kings Lynn, RBZ could often be seen on the X1 service linking Lowestoft and Great Yarmouth with Norwich, Kings Lynn and Peterborough. Renumbered in the First fleet as 20502, it migrated to Scotland during 2009 and was employed by First Glasgow
when Syd Eade took a photo of it in April 2013.

The other two buses of interest are Ex Nottingham City Transport Scania N94UDs YN07EYX/Y which are now with Sanders of Holt. The East Lancs bodied OmniDekkas were new to Nottingham in March 2007 as their 759 and 760 respectively.

My thanks to Syd for the photo and to Ross for the continuous monthly reports from Ensign.

Roy
Posted by eastnorfolkbus at 21:34