Buckland Bus Company of Rendlesham near Woodbridge has registered a new service and a cancellation. The former is the 250 service between Rendlesham and Thorpeness, via Snape and Aldeburgh, which will operate on Wednesdays, Sundays and Bank Holidays only This replaces the cancelled 250 between Fort Green, Aldeburgh and Thorpeness from 25th July 2018. 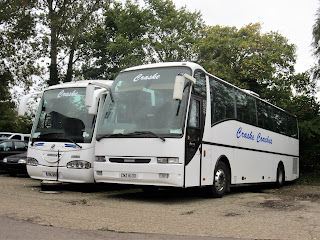 Two Norfolk companies have cancelled their operating licences; the first being Craske Coaches of Laxfield Road at Catfield in Sutton. The loss of a Stalham school contract last year, which it had operated for 16 years was clearly a blow to the company. It then decided to downsize with the Yutong YC15WDJ working for David Urquhart out of its Norfolk base, whilst the Berkoff, YN06NZV, was located in Essex operating from there. The cancellation suggests that the arrangement didn't work.


The other cancellation was that of Daniel Ford of North Walsham Road in North Repps near Cromer. Both were effective from 10th June 2018