In February, Shearings Holidays announced that it was adding another thirty new Mercedes Benz Tourismo coaches to its fleet under its ongoing vehicle renewal programme. 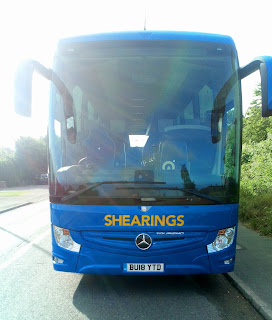 Each coach will be individually named after loyal customers and drivers, both past and present, in celebration of their life and loyalty to Shearings. They include new features, such as lateral seat movement, WiFi and USB charging points. The rest of the fleet will also have WiFi installed prior to the summer season.

Delivery of the new vehicles began in May and fortunately regular contributor Robert Kelly saw one of them parked up in Acle during yesterday morning in the form of BU18YTD. Thanks for the photo Robert

Shearings Holidays has a fleet totalling 130 with none of them more than seven years old.

Roy
Posted by eastnorfolkbus at 10:15