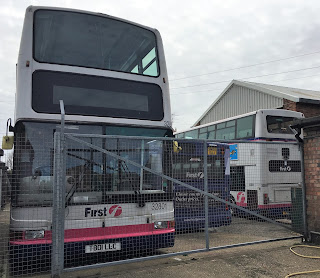 The two Dennis Trident/Plaxton Presidents, which had been languishing in the rear yard of  First Great Yarmouth's Caister Road depot for a couple of months, finally left the town on Friday. Both 32801/49 (T801/49LLC) were seen heading out of Great Yarmouth on the A47 towards Norwich later that day.

They were part of a trio arriving at Norwich from First South West during October last year and they subsequently moved on to Great Yarmouth. The other one, 32809 (T809LLC), returned to Norwich for use as a driver trainer in April whilst 32801/49 remained out of service.

They have now been sold by First to unknown buyers, although I understand both were observed parked up in Lincoln yesterday.

Roy
Posted by eastnorfolkbus at 22:21