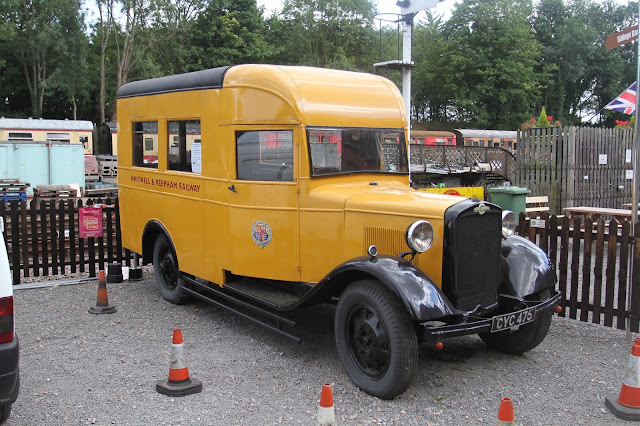 CYC 476 is a 1937 Morris Commercial CS11/30 estate bus bodied by Real Medland and Wells but later rebuilt for PSV use by Taylor of Cringleford, Norfolk as a B12F. It was moved from the Whitwell and Reepham Railway, Norfolk in June where it had been for eight years to a new owner Chris Stokes who lives near Chelmsford in Essex.

Chris reports that its condition is in a bad state, the body despite restoration work being carried out on it by a Norfolk car restoration company in 2013, is as rotten as the proverbial old pear. So the new owner, a qualified carpenter/joiner and boat builder, has to take stock of whats left and how to proceed. Hopefully it will be rebuilt again as an estate bus, but it maybe not in the exact form it was before. At least it's now under cover and restoration has commenced in earnest.

CYC 476 was first licenced in July 1937 by Sidney F Jenkins, Goathurst, Bridgwater as non PSV but later licenced as a PSV from January 1948 to February 1951. The bus was used both pre and post war on a bus route starting at Goathurst picking up in Enmore and Spaxton before terminating in Bridgwater. In between the morning and evening runs the seats were removed so that it could be used to transport coal and other goods and livestock.

After a number of subsequent owners Chris Cook, a volunteer at the Whitwell & Reepham Preservation Society, acquired it from the Wensleydale Railway in December 2012. As mentioned above it was then acquired by Chris Stokes.

My thanks to John Wakefield for his help in preparing this report and to David Beardmore for the use of his photo which was taken at Whitwell in August 2015.