I am very sorry for getting my bus numbers wrong ! I spotted it later that evening after I had sent you the e-mail

As you may know Yorkshire Rider buses 4201 to 4225 (M201 - M225 VWW) were delivered new to the Huddersfield depot in 1995 and I know from my time at First Great Yarmouth that most of them found their way into the FEC fleet and some of its sisters were at Caister Road .

Thanks for the story of 47218 and its sad end . It was a bus I drove nearly every early shift at Yarmouth as it was nearly always allocated to the 0637 to Lowestoft , which ran in at 0830 , and the bus then went empty to Norwich to run the 17/17A. As stated previously the bus meant a lot to me ,as I had also driven it in Huddersfield.

On my return to Huddersfield in 2006 I worked part time , and did the same 5 hour shift every day so often drove our 42178 (P708HPU), a bus I took to my heart as it had nearly the same number as my favourite Yarmouth bus ! The depot staff made sure it was held back for me on my last day to drive after 40 years on Huddersfield's buses !

Out of interest in the picture I sent you , my first trip each day was a 314 to Holme . Holme is a lovely tiny Pennine village at the base of Holme Moss . The route went through Holmfirth , famous as the filming location for Last Of The Summer Wine . Many an afternoon myself and 42178 trundled past Compo's cafe and Nora Batty's cottage !

One last item regarding the surprising links between here and the Huddersfield area also needs to be mentioned. 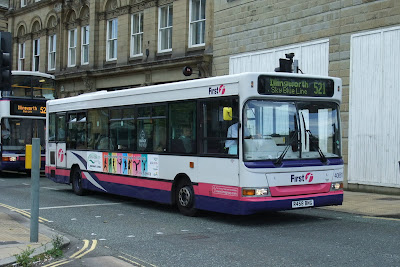 After branding for the Lowestoft-Kessingland service had been fitted to R458BNG, it was surprisingly whisked off to Huddersfield depot! As a result it never became 43458 in line with the rest of the batch when the five figure numbers arrived, and recieved 40881 instead; so is often overlooked by local enthusiasts. I have sent a photo of her  taken in 2009 in Halifax.

Many thanks to Syd and Michael for their interesting memories and photos
Posted by eastnorfolkbus at 11:59