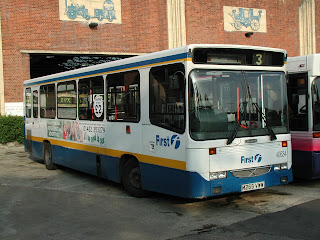 Our regular correspondent Grahame Bessey contributes the following on the Yorkshire darts:-

'After reading the various blog features regarding the ex Yorkshire Rider Darts of various types working with FEC, it reminded me that deep in my photo archive were images of a couple of Darts that first appeared with FEC from Yorkshire and worked in their Northern liveries here. 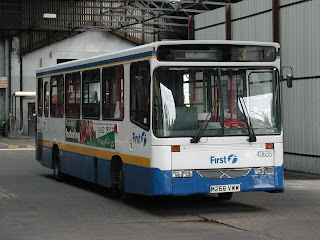 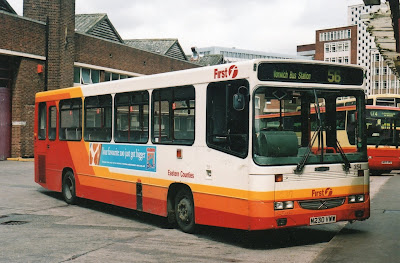 Another example arrived in Leeds Citylink livery in the shape of M230VWW gaining FEC fleetnumber 354, seen here in Surrey Street Bus Station, Norwich, this went on to be repainted into a version of Barbie 2 livery minus the pink fades.

No 354 was unfortunately
one of the victims of the arson attack at Stalham outstation (which I have photos of taken the day it happened). I will try to find the Stalham shots for you in due course!'

Many thanks for the report and photos Grahame.
Posted by eastnorfolkbus at 21:25