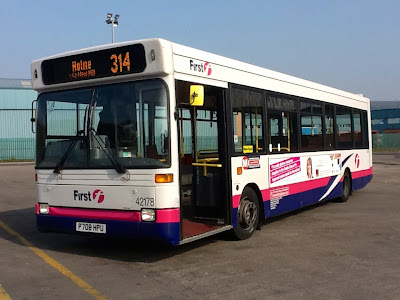 Following Syd Eade's report on the blog regarding the first and last vehicles he drove whilst working for Eastern Counties and First Bus, I was contacted by Michael Sayer, a Norfolk exile.

"I always read your fasinating blog . I was so interested to read about Syd , who took a photo of the last bus he drove before retiring. I followed a parallel life up here in Huddersfield!!  I joined the then Huddersfield Corporation Transport in June 1972, and worked for the same company all my life . Just like Syd in Lowestoft I saw many changes. Huddersfield Corporation sold its buses in 1974 and we became MetroBus, and eventually the famous Yorkshire Ride , which in turn was sold to Badgerline until we became part of First Bus in 1996.

The picture is of First Huddersfield 42178, a short wheelbase Dennis Dart which I drove a lot in my last months, and drove on my last day at Huddersfield on March 22 this year. The photo was taken by me at our Oldfieldhouse Lane depot on that day before I took it out for the last time! It amazes me that Syd and I lead a similar work-life over almost the same amount of time

Many thanks for the contribution and photo Michael
Posted by eastnorfolkbus at 15:38