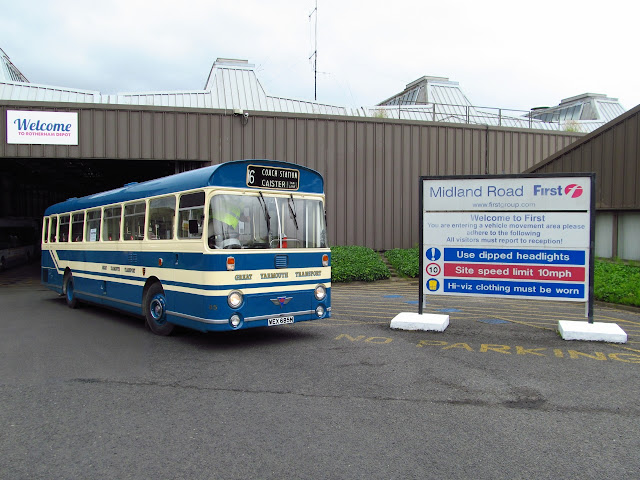 Today saw the return home of Great Yarmouth AEC Swift 85 WEX685M. I was asked to go along up to First's Commercial unit in Rotherham where it had been having some minor work carried out and MOT before making the Journey back to Caister Road. 85 has been purchased by First Manager's Danny Beales and Chris Speed. So what was my part in the proceedings you may ask!. I was named driver for the car journey back whilst Danny & Chris shared the driving of 85, basically i drove in front in case of any emergencies on the way! Thankfully all went superbly well and we arrived safely back at Caister Road around 6pm this evening.
WEX685M was part of a batch of 12 AEC Swifts delivered to Great Yarmouth between October & December 1973. This brought the number of Swifts in the fleet to 33, others having Willowbrook bodies, all were dual doored, 2 more were aquired in 1978 from Waveney District Council these having different flat windscreens rather than curved.
85 was in service for 23 years then placed in store prior to disposal at Eastern Counties Wellington Road Depot in Yarmouth, 85 donated many parts to sister 83 which ran until the end of summer 1997.
85 was now looking a sorry state missing numerous parts until February 1998 when she was purchased by Nigel Blair who set about the task of getting the necessary parts to get her back to her new home in Yorkshire, her first rally outing was in May 1998 at the Heart of the Pennines Rally.
Now back at Caister Road, 85 will be kept in the depot and hopefully it will begin to appear on the local rally scene once again in the not too distant future.
Finally thanks to Chris and Danny for asking me along, really enjoyed today, another blog will be up shortly looking at what else we caught up with at Rotherham.

Grahame
Posted by Norfolkbus at 21:17