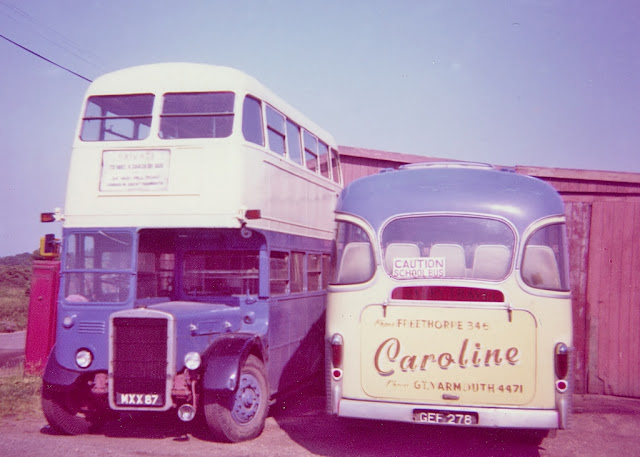 He tells me that MXX87 used to live in the open at the small garage at Halvergate, and he took this photo in July 1970 at those premises. He continues 'It was used on a local schools run and on summer Saturdays would work the stage service into Great Yarmouth and back for shoppers from there via Freethorpe....but I never went on it as you would get left in the middle of nowhere! The destination never changed, I think it was just a piece of paper stuck behind the glass.'

The photo was taken at the former Lake of Halvergate premises, the company being acquired by Caroline in 1955. For some time it was where most of the company's maintenance was carried out.

Incidentally, MXX87's companion in the photo is a 41 seater Plaxton bodied SB1, new to Beeline of West Hartlepool in March 1959. Note the telephone numbers!

Roy
Posted by eastnorfolkbus at 08:45