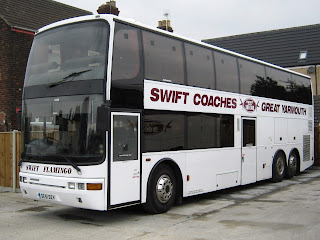 Richards Coaches of Guist are advertising the availability of their ex Swift Jonckheere Monaco bodied Volvo B12BT. Registered SE51DZV, the 71 seater was acquired by Richards in September 2013

Another coach on the list is Swift's Neoplan bodied Dennis Javelin SJI8127 which was confirmed by one of the employees as being available for disposal in early January. It was last seen in Swift's Southtown yard on the 29th of that month and has not been seen since. So I am assuming that it has finally gone bringing another era to an end

Roy
Posted by eastnorfolkbus at 10:41