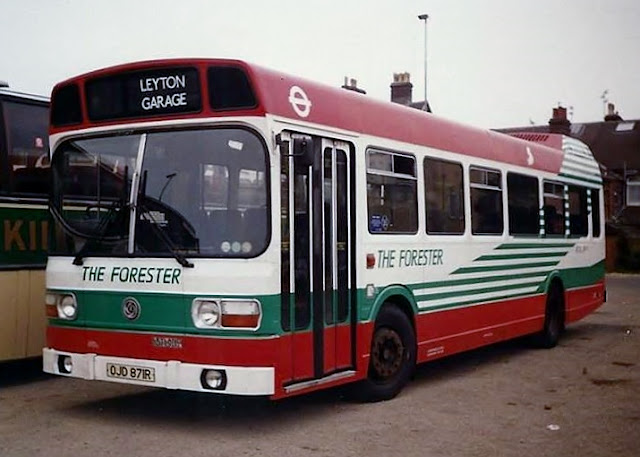 Our first photo this week is of  a mark 1 Leyland National OJD871R which made the long trip to Great Yarmouth from the capital. It was a two door bus delivered new to London Transport in 1977 as LS71

It was later converted to single door layout with coach seating in 1986 at the same time as having the forester livery applied and believed to be for use on a designated route - the X99. It is thought to be Forest District Council's only attempt at a commercial service which ran half hourly between Basildon and Harlow. When the X99 finished, the buses went to various places, including Leyton Garage, from which it is operating in the photo.

It left London Transport in 1993 for Stuart Palmer of Dunstable prior to moving on to The Eden later that year. It also saw use with Whiting of Ferrybridge, Nebb of Anfield Plain and Dart of Paisley. OJD last operated for McKindless of Wishaw before being sold for scrap to Dunmore of Larkhall in May 2001 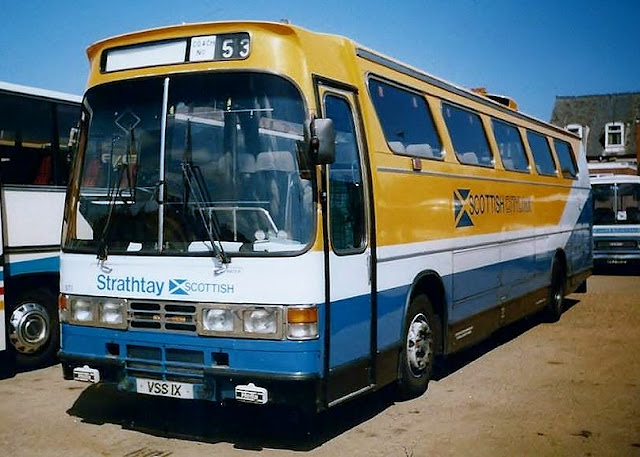 The second offering is of a coach that had travelled even further to Great Yarmouth and that was Strathtay Scottish VSS1X. The Duple Goldliner bodied Leyland Tiger was new to Alexander (Northern) in July 1982 which passed to Strathtay Scottish on its formation

VSS1X was then thought to have gone to Tame Valley in Birmingham before passing to Travel West Midlands. It ended up being re-bodied with an East Lancs bus body with Midland Red North and subsequently re-registered OOV761X before becoming part of the Arriva Midlands fleet

It later saw use as a school bus with Patterson of Seahouses, Alnwick and a photo of OOV in 2006 its new guise can be viewed HERE