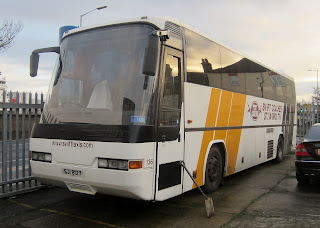 Neoplan bodied Dennis Javelin SJI8127 was last seen in Swift's Southtown yard on the 29th of January and has not been seen since. The coach, originally believed to have been sold for export, is now thought to have been acquired by a Cumbrian operator

My thanks to Robert for the information

Roy
Posted by eastnorfolkbus at 11:28