Courtesy of 'Reg Vardy', today is the first contribution in a three week's series of  nostalgia focussing on coaches visiting Beach Coach Station during 1987/8. Apologies to those who subscribe to Reg on Facebook as they will have already seen them 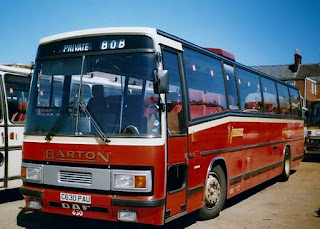 I also used to visit the ex railway station during the 1980s - Saturday lunchtimes between 12 and 2 were a must for the local bus enthusiast. It gave the opportunity to see coaches and buses from far and wide. Operators like Trent, Midland General, East Midland, Barton are names that immediately spring to mind

The first photo from Reg's collection is of C630PAU a Plaxton Paramount bodied DAF. New to Barton in May 1986, it subsequently found use with Croydon Coaches of Purley 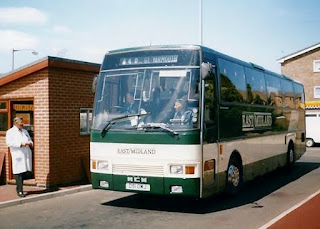 The second is of an East Midlands MCW Metro HiLiner arriving at the coach station's Sandown Road entrance. D51OWJ, previously a demonstrator, was one of two new to East Midlands during October 1986. It was later acquired by Northern Bus during 1989

Roy
Posted by eastnorfolkbus at 10:47