Yesterday I felt in need of some bus activity and, with school duties out of the way with half term, I decided to head off to Lowestoft to get photos of the recent arrivals from First Bath

However, the outward journey didn't go as planned - I arrived near to the bus stop just to see the X1 passing me with celebrity SN60CAA in charge. After an expletive, I decided to walk to Gorleston High Street where I would have a choice of routes - and it rained too!

As expected (dreaded!), the first to arrive was a President in the shape of  32211 LT52WTU on the 1 and I headed upstairs to see the front seats were occupied. Only as far as the James Paget Hospital though, so I changed seats in the hope of getting a photo through the front windows. As most of the route was southbound, and the sun out, there was fat chance of that! There was a westbound stretch along Corton Long Lane where I was fortunate that there was another President heading towards us on the reverse of the same route

Arriving at Lowestoft Bus Station, I noted that Lowestoft Corporation liveried ALX400 30888 W743DWX was about to work the X22 to Norwich. Another bus I wanted a photo of and, although the low sun wasn't helping, this is was what I got! 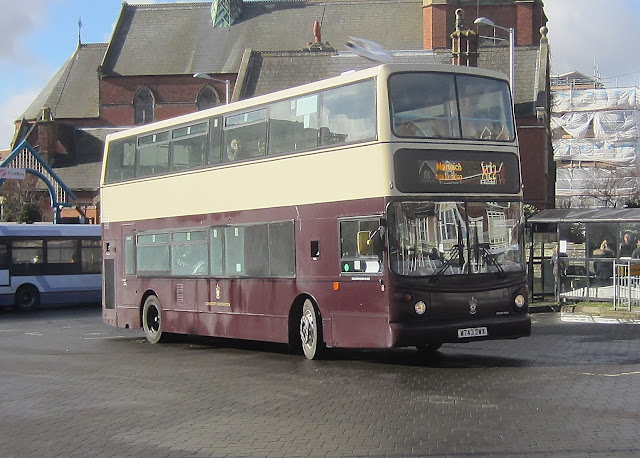 With the cold and rain shower beginning to take effect, and none of the sextet of new arrivals making an appearance, I decided it was time for a caffeine injection.

Armed with my hot drink, I headed off to Station Square for a different location for photos. No sooner had I arrived then another shower meant a quick dash to the railway station for cover. I immediately decided not to partake of some passive smoking so headed for the bus shelters instead. 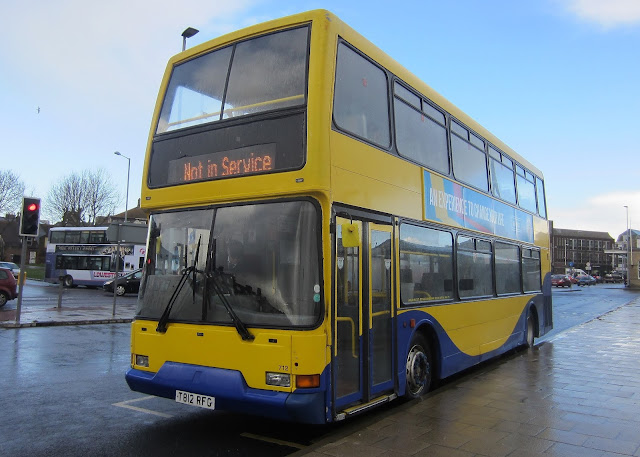 Straight away an Anglian decker arrived with no passengers and 'Not in Service' on the destination screen. T812RFG, an East Lancs Loloyne bodied Trident, didn't appear on any service and I wondered what it was doing there.  I later learned from social media that a presence there appears to be a common occurrence. (see SteveW's comment below for the reason!) 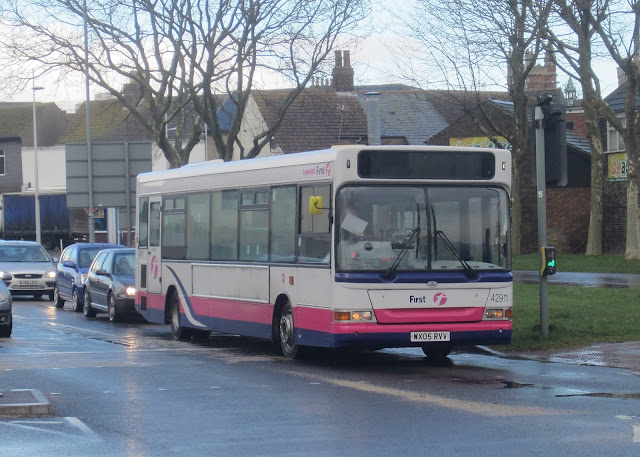 With the rain almost stopping, I espied my first newcomer in the queue of traffic heading towards me on Katwijk Way. Luckily 42911 WX05RVV was stopped at the lights allowing for a reasonable photo - perhaps the sun was shining down on me at last!

Returning to Gordon Road and the bus station, I observed that Suffolk Norse were employing regulars ADL Enviro300 SN56AYL on the 107 to Gunton and Iveco MX53VHL on its 115 route to Kirkley

I thought I would also look in at the former Eurosun premises at Norwich Road Industrial Estate. Seven vehicles were on site in various states of (dis)repair with King Long WJI5242 appearing to be the only one in a roadworthy condition now operating for Angies Tours.

TIB was being used as a Christmas tree for spares and looked unlikely to ever turn a wheel in anger again. K2HWT was formerly with ex Great Yarmouth operator Caroline Seagull

Roy
Posted by eastnorfolkbus at 11:10