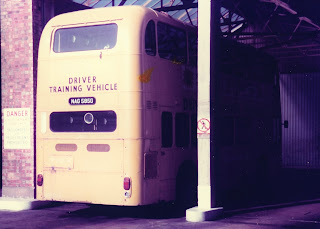 NAG585G was new to Western SMT in Bonnie Scotland in October 1969 receiving fleet number 2240. It subsequently transferred to Eastern Counties becoming VR 330 in the fleet and also served some time with Cambus. During June 1981 it was converted to a driver trainer as X65 painted in an all over yellow livery. The bus was subsequently scrapped in the mid 1980s

The photo was unusual in that it was rare to see an Eastern Counties departmental vehicle at the town's Wellington Road Bus Station plus it was taken at the Devonshire Road entrance. It is is dated 21st October 1983