Not many of the residents in the Great Yarmouth and Lowestoft area would have been unaware of the East Coast Truckers convoy held every year during the Sunday prior to the August Bank Holiday. If you didn't hear the noise of the truckers horns you may have been held up in the traffic! 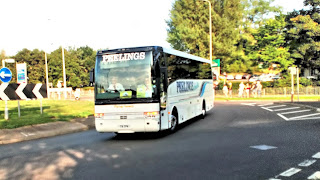 The event is arranged by the East Coast Truckers charity raising monies for the many disadvantaged children in East Anglia. This year some 80 trucks took part in the run from Norwich's County Hall to Pleasurewood Hills at Lowestoft via Great Yarmouth.

As usual coaches were used to transfer support staff to the event with Dolphin Travel and Peelings Coaches providing the transport. The 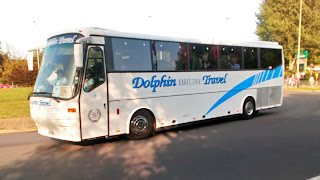 My thanks to Robert Kelly for supplying the photos. I had intended to get my own photos from the event but the camera decided it didn't want to take any (!) and unbelievably Robert was standing only a few yards from me and I didn't realise it!

Roy
Posted by eastnorfolkbus at 11:12