After successfully completing my quest to get a photo of a First Excel decker on the 6, I thought I would hang around (after finishing the shopping!) to see what would turn up on the Borderbus 14:16 Bungay to Great Yarmouth 580 service.

I was hopeful in that it might be one of the two remaining red liveried Scania OmniCity deckers and, surprise surprise, it was! However, the registration threw me completely as it had special plate BB57BUS. Now was it LX59CNC or LX59CNJ? A prompt reply to my tweet to BorderBus confirmed it was the latter which also now has the fleet number 210. 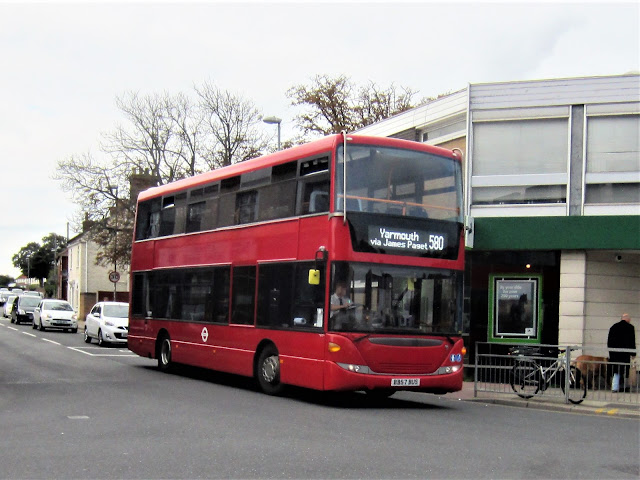 The 'new' trio have displaced the former Volvo B7TL/Wright Geminis BB03BUS, LF52ZPB/C which have gone to Scania in exchange. Incidentally the other red Scania carries the registration BB58BUS, fleet number 208 and was previously LX59CNC.

BorderBus is currently awaiting certification for the newly painted 209 LX59CNE (see BorderBus Repaint) before the next one goes away for the same treatment at Hants & Dorset Trim.

The operator also reports that the 580 Bungay to Great Yarmouth service is doing extremely well and proving to be very popular.

Roy
Posted by eastnorfolkbus at 18:09