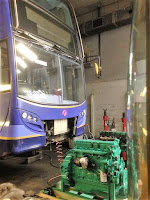 News from First's Great Yarmouth depot is that Excel liveried Alexander Dennis Enviro400 33817 (YX63LKF) is to shortly receive a new engine. Normally based at Kings Lynn, it is seen here at Caister Road awaiting the transplant.

A second member of the Excel fleet is also visiting the Great Yarmouth workshops with Lowestoft Enviro400 33821 (YX63LKL) due to have its MOT. 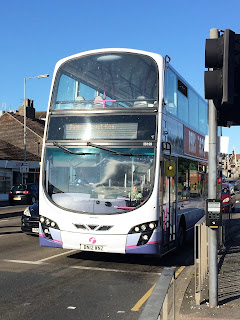 As previously reported, Wright Eclipse bodied Volvo B7 66344 (MV02VCX) is away at the moment continuing to have a new engine fitted.

Meanwhile, former First Leeds Volvo B9TL/ Wright Eclipse Gemini 36199 (BN12WNZ) is returning off loan back to its home depot of Norwich this weekend. It is seen here at the traffic lights on Bridge Road in Southtown late this afternoon making its way to the James Paget Hospital in Gorleston on service 8.

My thanks to our contacts at First Great Yarmouth for the information.

Roy
Posted by eastnorfolkbus at 20:54