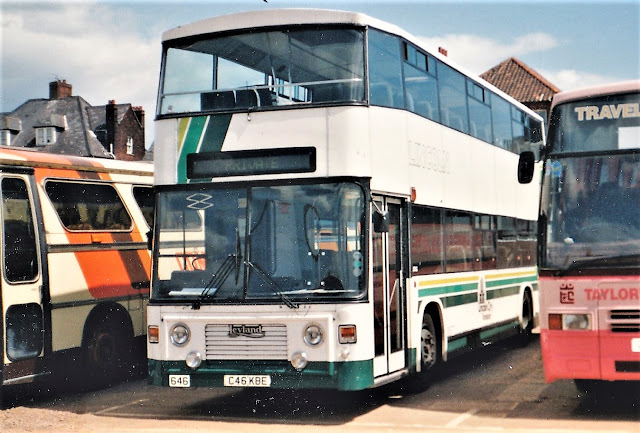 Craig Schofield on Flickr says the decker 'is a long wheelbase East Lancs bodied Leyland Olympian which was new to them in October 1985 as fleet number 46. This was numerically the first of three identical vehicles. They were quite impressive vehicles when new as they had 6LXCT engines and high ratio diffs so had quite a decent turn of speed on a longish road! At the time, Lincoln City Transport had a few National Express contracts and these occasionally were used to replace the AEC Reliances or Leyland Tigers when they were off the road'

C46KBE later became part of the Lincolnshire Road Car fleet when they took over Lincoln City Transport in February 1993. The following year the Olympian was repainted into 'Coachlink' livery and was mainly based at Louth depot

It was subsequently acquired by Stephenson's Coaches of Rochford in Essex who, in turn, sold it on to MacPherson (?) during 2006 and it's there that the trail runs cold.

Roy
Posted by eastnorfolkbus at 10:12