Following our Saturday post regarding the two disposals by Dereham Coachways (Dereham Coachways Departures - 23rd July 2022), Nick F visited the their Rashes Green premises yesterday and found the operation had closed. It was subsequently confirmed on Facebook that closure took place last week 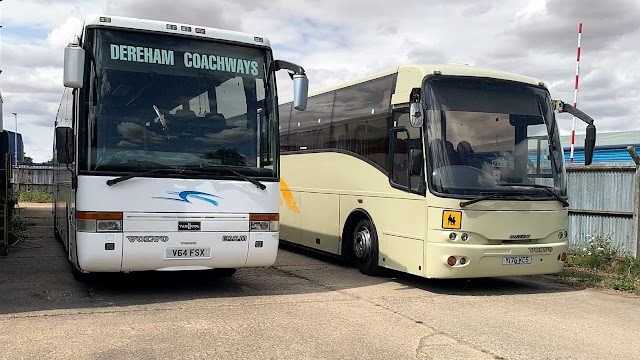 However, three coaches remain on site which included two Van Hool T9 bodied Volvo B10Ms in the form of V64 FSK and XFK 305. The former was acquired from Docherty of Auchterarder, Scotland whilst the latter previously registered as R790 WSB was purchased from Collins of Cliffe, in North Yorkshire. The third resident was Jonckheere seventy seater Y176 KCS, another Volvo B10M

My thanks to Nick for the photo and information.
Roy
Posted by eastnorfolkbus at 11:55