Firstly a thank you to Grahame for his Lockdown Look Back posts and secondly apologies for some photos disappearing from recent posts for some reason. They should by now have been replaced. 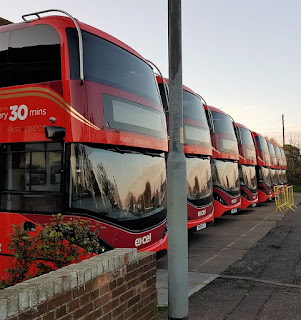 Today's photos are of the eight Excel Scanias currently based at Caister Road. Taken by Duty Controller Kevin Buckles at 5 am yesterday, they are parked up from left to right in numerical order (30912-9)  ready to move key workers

Other information filtering through is that the First Lowestoft depot at Gasworks Road is currently closed with all operations transferring to Caister Road. Laine Tisdall emailed me yesterday to say that he used his 'designated hour exercise on a walk along Lowestoft's sea wall, which also took me through the industrial area that First's depot is located within. It appears the depot is currently not in use, as it is packed to the fences with older fleet, including both of GY's heritage liveried buses and the Yorkshire Geminis. I did not take any photos as I felt it would be inappropriate in the circumstances.

As a key worker in the registration service I still have to use buses during weekdays and from my observations it seems all services are being run from Caister Road at present using just four types of buses, the Excel Scanias on the X1, Streetlites on GY town services, Lowestoft's E200s on Lowestoft town services (I often see the E200s running light on the A47 in the mornings and evening), and E400s on everything else.'

My thanks to Laine for the information regarding First Lowestoft depot which has been confirmed by my sources at First. My thanks also to Kevin Buckles for allowing me to use his photos.