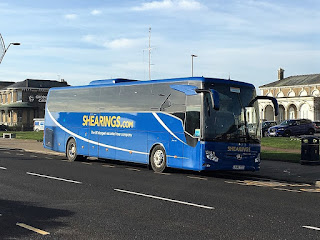 The Specialist Leisure Group (SLG), owner of Shearings Holidays and the Bay Hotels chain, is attempting to avoid becoming the next corporate casualty of the coronavirus pandemic.

It has been reported that SLG is having talks with a number of potential buyers in an attempt to hold off administration and the company's collapse. The operator runs numerous tour holidays to Great Yarmouth and surrounding area using the town's Carlton Hotel, part of the Bay Hotel chain, as its base.

Shearings had already suspended its holiday programme and laid up its fleet of coaches as the effects of the virus outbreak first became clear. Most of the group's 2,600 workforce is reported to have been furloughed under the government job retention scheme.

Shearings' demise could have a serious impact on the area's tourism industry.

Roy
Posted by eastnorfolkbus at 08:41