Today's Friday Flashback is the last as I have now exhausted my collection of old photos not published before on the blog. It is a special one featuring vehicles operated by local independent Swift Taxis. 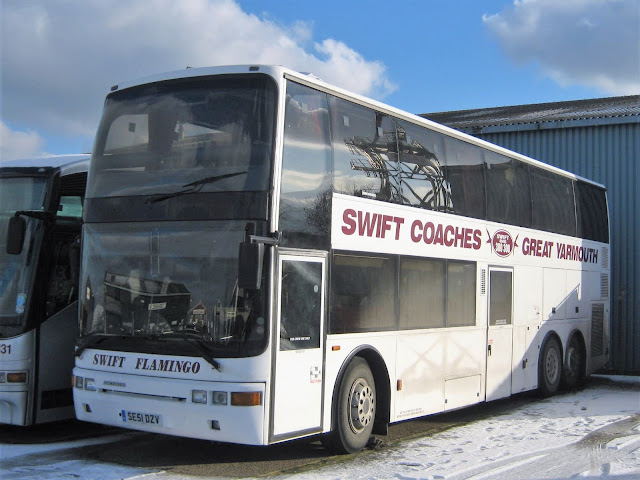 You may have seen photos of these vehicles previously but these were taken on Swift's James Watt Close yard on the 21st December 2010. The first features the only double deck vehicle operated by the company a Jonckheere Monaco bodied Volvo B12B registered SE51 DZV. Wearing fleet number 130 she was named Swift Flamingo

Earlier registered KSK 983 when owned by Parks of Hamilton, it was acquired from Trathens of Plymouth in August 2009 mainly for use on school contract work. Richards Coaches of Guist acquired the 71 seater from Swift in November 2012 and reregistered it as GDZ 435. After Richards closure it was bought by its current owner Completely Coach Travel of Norwich. 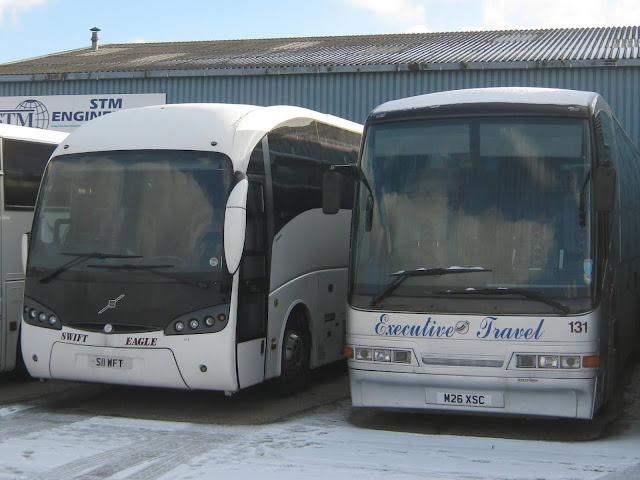 Also parked together in the yard that snowy day were Volvo B12M S11 WFT and Scania K113 M26 XSC. The former was earlier registered CE02 YRX and received fleet number 112 and named Swift Eagle having been acquired from McNaulty of Wembley in August 2006. It was later noted with Vale Travel of Aylesbury. As for M26 XSC it received a number of identities prior to joining Swift in August 2009 where it became Swift Kingfisher receiving fleet number 131. 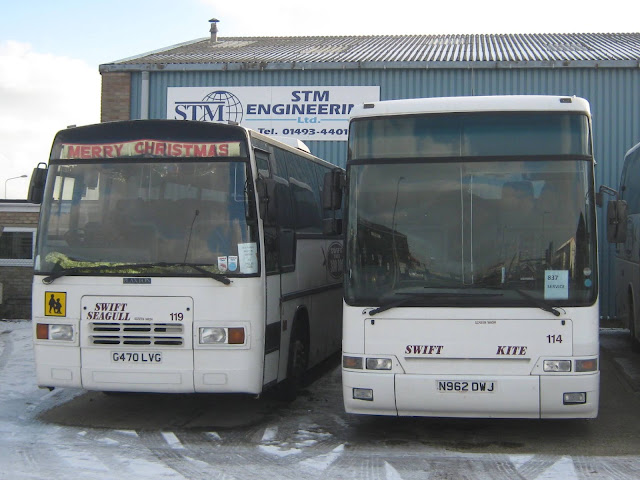 The next twosome are 119 G470 LVG Swift Seagull and 114 N962 DWJ Swift Kite. Dennis Javelin Swift Seagull was originally with Cobholm Hire (Caroline Seagull) from new in March 1990. It was purchased from them following voluntary liquidation in March 2008 and was regularly observed on schools work. It was removed from operational duties in late 2012 due to age and condition and was ready for the scrap yard. However, a local enthusiast, Terry Wilkins, acquired it for preservation being stored in the open at Hopton. It stayed there for some time with Great Yarmouth's GEX 740F. But whilst there it received attention from vandals and in 2020 both vehicles were recovered for further preservation at Guyhirn in Cambridgeshire
As for Volvo B10M-62 N962 DWJ, it was new to Claribels of Birmingham in April 1996 and later became part of the National Holidays fleet from whom Swift acquired it in August 2006. In May 2014 I reported it sold P & M Coaches of Wickford in Essex. It was last observed on rail replacement duty for them in March 2017 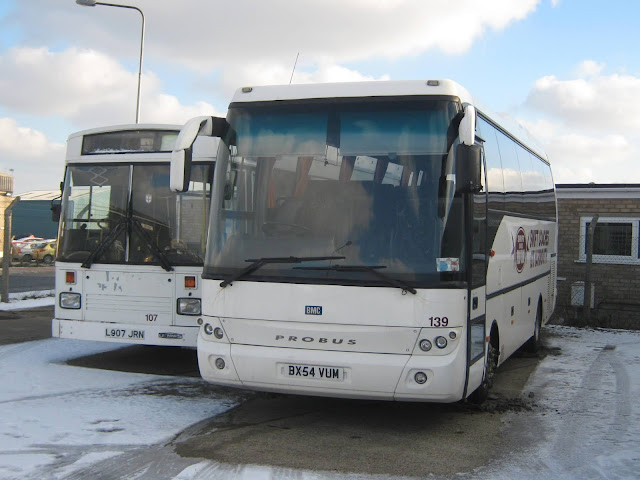 The final photo shows another Swift twosome in the same yard in the shape of Dennis Dart L907 JRN and BMC Probus BX54 VUM. The Dart was new to London Buses in June 1994 as their DEL7. Swift purchased the East Lancs bodied bus from Cumfybus of Southport in November 2005 and it received fleet number 107. BX54 VUM was new to Amza Travel of Blofield in September 2004 and moved to Swift Taxis when they acquired the business in late 2009 and it became Swift Nightingale. It was sold to a Bedfordshire operator in .May 2013 and in October that year went to Bradford coach hire company Skyways Travel.

Well that's it! The final Friday Flashback completed and I hope you've enjoyed our regular weekly lookback. I must admit I am relieved now that I don't have to do the research for future editions but I am sure I will miss it!

Roy
Posted by eastnorfolkbus at 12:29