Its been three months since the working relationship began between Angies Tours in Lowestoft and Wrights Coaches in Wroxham following the loss of Wrights Coaches Operators Licence in October.

Both companies are still trading, albeit slightly different under the new regime with Wrights Coaches operating in more of a brokerage role regarding Coach Hire (Exactly the same as any other Coach Hire broker in the UK) and also still selling their popular DayBreaks in North Norfolk and they’re currently exploring lots of different avenues in terms of Coach Holidays and how they can expand their offering to their loyal customer base. Its been a difficult time for the operator over the last few months after what seemed to be a promising start over the past four years. Its great to see their vehicles still out on the road. 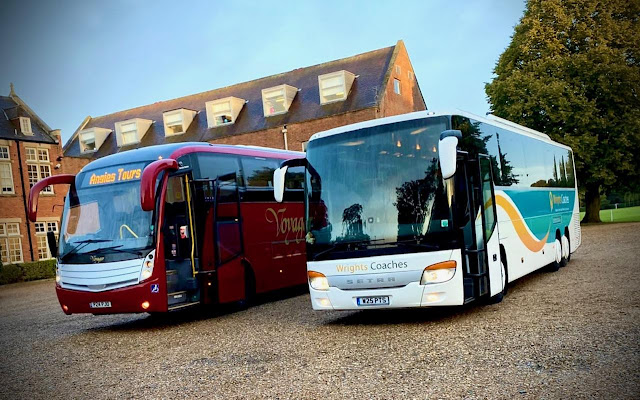 Angies Tours, based in Lowestoft have long term leased a selection of Wrights Coaches vehicles and are now taxing, insuring and maintaining the vehicles and all staff members have also transferred over to Angies Tours too. Speaking to Mr Philip Overy, Owner of Angies Tours he says “Wrights Coaches is a ready made business ready to compliment my existing operation. North Norfolk is an area I know very well from the days as Eurosun Coaches in the 1990’s and i’m pleased the working relationship is going from strength to strength”. He continued “I’m starting to see comments from members of the public, or enthusiasts which are so wide of the mark its unreal; they can only be described as upsetting, and slanderous – I’d like to assure people are aware that all vehicles are operated by Angies Tours”. The relationship between Wrights Coaches and Angies Tours means that Wrights Coaches are effectively a very good customer for Angies Tours, which includes their own DayBreak Programme, and a very large bookings diary which has also been shared out to ourselves and a handful of other Coach Operators in the area.

Asked about plans for the future Philip Overy commented “The Coach Hire and Travel Sector is a very difficult one, so the advantage comes through economies of scale, a larger team of dedicated drivers, and having the right people, in the right position. There were, and still are many positives to Wrights Coaches as a business and I think the future could a very successful one for both companies here in East Anglia. We face a wide range of issues like PSVAR, Covid etc over the short term period and they should be our, and other people focus in the industry. We maintain committed to offering our customers the very best and if anyone would like to be part of this continued success story, id actively encourage them to come and see me – We’re always looking for dedicated individuals to join our team, and our selection of vehicles, and range of work in the diary mean an enjoyable employment is here waiting for the right candidate(s)”.
Posted by eastnorfolkbus at 11:32