A couple of entries in Ross Newman's Ensign Report for November are of particular interest in respect of their local history. 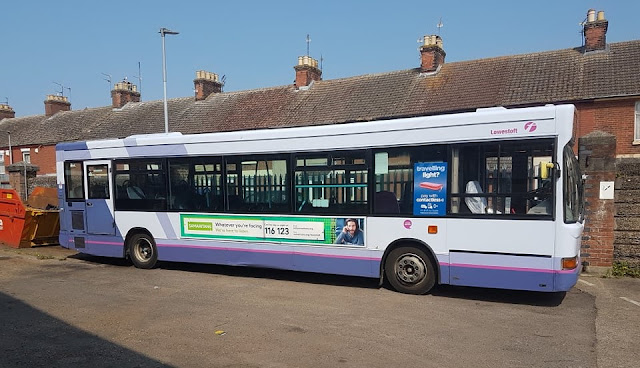 To start with, he records that First's Alexander Dennis Pointer Dart 42929 SN05 EAJ had arrived from First Essex, but a sighting of it in the rear yard at First Great Yarmouth's Caister Road Depot in July (above) makes me wander whether this is completely correct? (A subsequent sighting on 8th December shows it still at GY with fleet names painted over! - see more recent post) 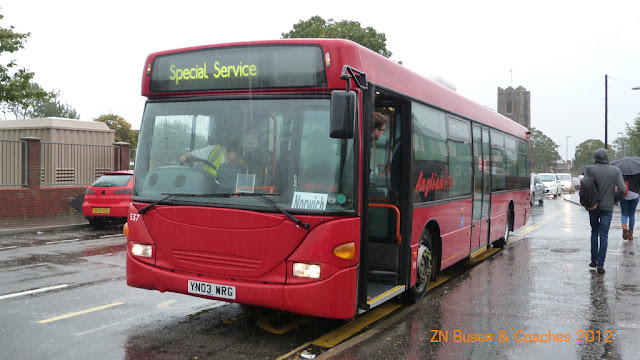 The other vehicle of interest is former Anglianbus Scania OmniCity YN03 WRG which joined the Beccles operator during September 2012 from Metrobus. Running in London Red it first moved to Ensign in June 2013 and saw further use with Grant Palmer on the Luton Busway registered as BU52WAY. After returning to Ensign for a second time it has now gone to Past Due Driver Training of Tilbury.
My thanks to Zak Nelson for the photo of YN03 WRG which accompanied my original post in September 2012 (Seeing Red - 25th September 2012) I am also grateful to Ross for his monthly updates.
Roy
Posted by eastnorfolkbus at 12:44