In late March, Grahame reported on the arrival of two First Bradford Volvo B7TL/Wright Gemini's at Caister Road and indicated that three more were expected soon.(Bradford duo arrive at Caister Road - 24th March 2022). Two of those were later delivered having been converted to open top by Thorntons at Ashington leaving the last one, 37026 YJ06 XKP, outstanding 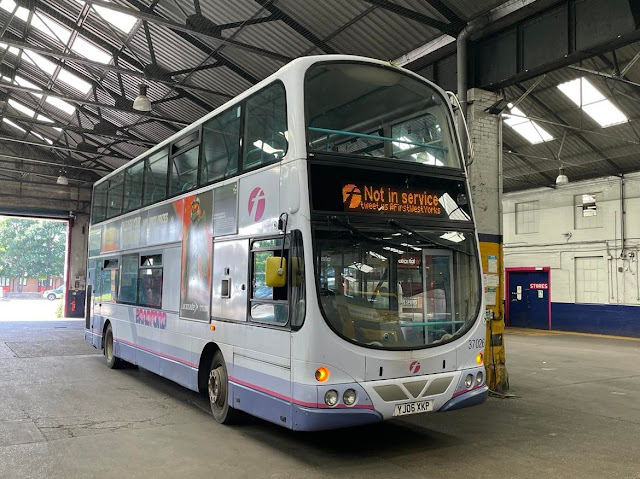 With its continued non-arrival there was much speculation about the reported transfer on local enthusiast Facebook groups. This was compounded by the fact that Bus Times included it under the First Norfolk & Suffolk fleet but allocated to Bradford. Apparently it was awaiting a replacement engine and was expected at the Great Yarmouth's Caister Road depot sometime today.

It did finally get delivered today with Will Drake recording its arrival and it was also observed that the legal lettering still referred to First West Yorkshire Limited. It should be on the road within the next few days.

My appreciation goes to Will for the use of his photo and to First for the information.

Roy
Posted by eastnorfolkbus at 15:34