Full advantage of the sunny conditions were taken today, armed with the cameras, shorts on and it was off up to North Norfolk to take in the new Coasthopper workings now operated by Sanders after the withdrawl of services from Norfolk by Stagecoach.

Sanders have aquired a batch of ex Wilts and Dorset Volvo B7RLE's from Go Ahead and they are being used in their former owners livery but carrying full Coasthopper branding with Sanders fleetnames. They look very tidy to be honest for the age of the vehicles and do stand out.

The route CH4 runs from Wells through to Cromer, taking in Blakeney & Sheringham on its journey along the coast. The CH5 then extends the route through to North Walsham via Mundesley along the coast road. It is a half hourly service which runs 7 days a week from 27th April to 27th October before a winter timetable is put into operation.

Sanders are now the only operator running around the Sheringham & Cromer corridor with Lynx taking over the opposite end of the route between Kings Lynn & Wells. 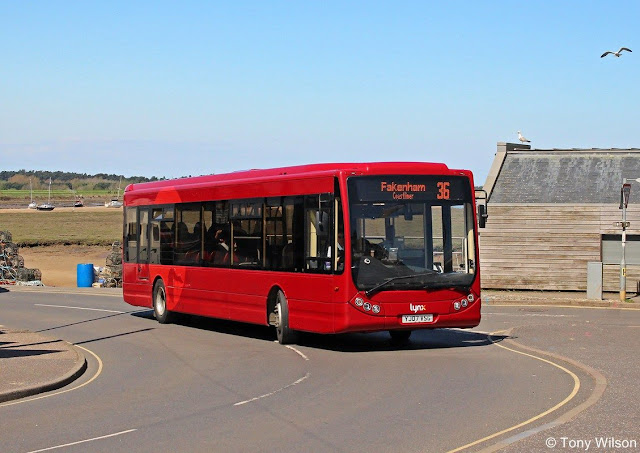 Tony Wilson was out and about on the opening day of the new services and pictured above is Lynx Tempo YJ07VSG working the 36 service to Fakenham heading out of Wells. I bumped into Tony at Sheringham where we had a good chat and he kindly allowed me to use his photo for this post and future posts if we require them. Nice to meet you sir and hopefully we will meet again soon.

Grahame.
Posted by Norfolkbus at 09:44