I intended to head for Norwich this morning despite the roadworks at Postwick. I intended to use the alternative route to the fine city - the A146 Lowestoft to Norwich road. That was the plan until I heard about a tree blocking the road at Framlingham Pigot. Fearing traffic congestion I opted for a visit to Lowestoft instead

Again I managed to get some spare time watching the comings and goings at Gordon Road. Apart from the appearance of First Great Yarmouth's ALX400 32058 arriving on the 1 in its new livery there wasn't much out of the ordinary taking place 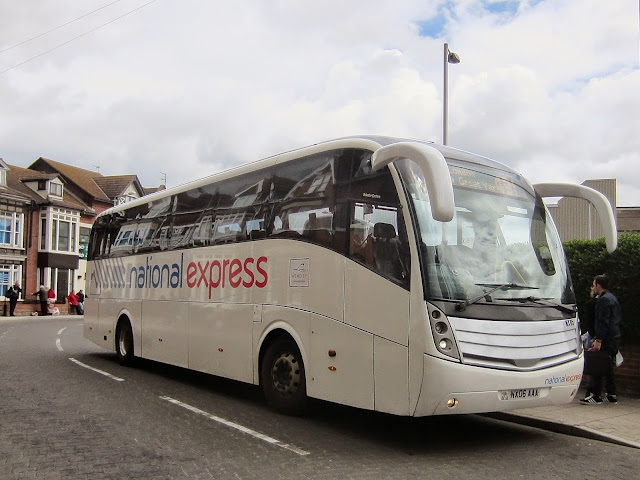 I was about to abandon my watch when a National Express Scania K340/Caetano Levante pitched up to work the 13:05 Service 491 Lowestoft to London via Great Yarmouth and Norwich. Nothing unusual there as one of Ambassador Travel's four K340 are regulars on the route

On closer inspection I noticed it had fleet number NX05 affixed to the front and the registration NX06AAA; with the legals showing South Gloucester Bus & Coach Company of Bristol! I can only suggest that this was on loan to replace the one damaged in the recent incident on Acle New Road

Further investigation found it to be previously registered as FJ57KHM and new to National Express in October 2007. South Gloucester had subsequently acquired NX05 and it was recently loaned to Whippet Coaches for National Express work

South Gloucester Bus & Coach was established in 1982 and was awarded its first National Express contract 25 years later. They currently operate eight
Posted by eastnorfolkbus at 17:34