Yesterday's post on Grey Green prompted a response from our regular Ipswich contributor, Jim Long, on his memories of Grey Green in the Suffolk town

'Having looked at your blog ,it jogged the ole brain box on George Ewer. Personally I wasn't a follower until, like all things, they pulled out of coming our way on the Yarmouth to London service via Ipswich. I could kick myself, if i was double jointed, all those superb Leylands & tired ole Bedfords that tried to keep to time as they pulled into St Margaret's Green Ewer depot over the years My loss entirely. 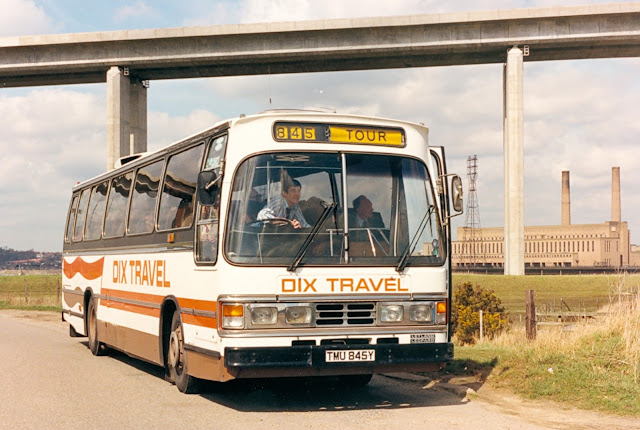 I did take two pix, the first was of TWU845Y with Dix Travel which is in your blog photo. Looking at where I took her, I gather she was off route slightly in order to take in the Orwell bridge & it's river settings. Behind her is the old coaled fired Ipswich power station, long gone now. The photo was taken in the late 80's or early 90's. 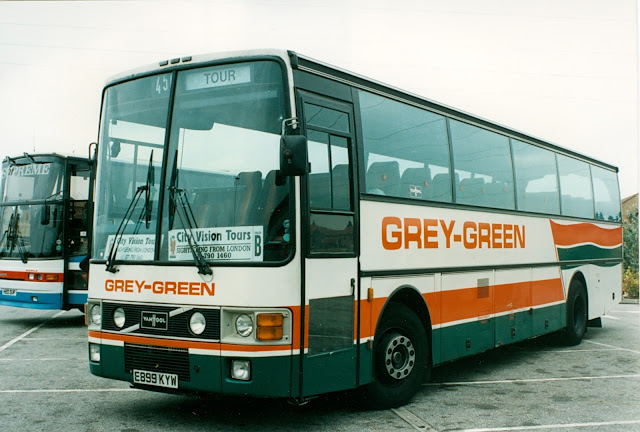 The other is of E899KYW. I only caught this one as the other two had already pulled out onto the main road, which made me call in at Tesco Copdock. This is where I captured this gal and I expect she was off to Great Yarmouth or Felixstowe; or as it said on the board a tour.'

Many thanks for the your recollections and photos Jim
Posted by eastnorfolkbus at 09:16